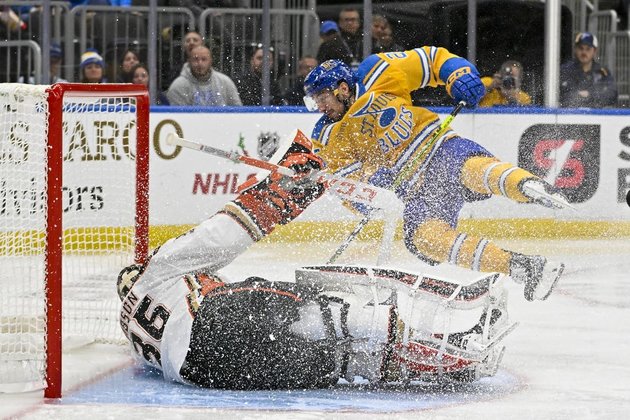 The St. Louis Blues will ride momentum into their game at Buffalo on Wednesday, while the Sabres will bring a sense of relief.

St. Louis finds itself on a seven-game winning streak and hasn't lost since Nov. 8.

"Winning cures everything, everyone feels better about it," Blues captain Ryan O'Reilly said. "We have that belief back in our group and it's exciting. It's fun coming to the rink."

The Sabres are coming off a 7-2 road victory over the Montreal Canadiens on Tuesday that snapped an eight-game losing streak.

"It has taken a weight off my shoulders, I can tell you that, personally," Sabres coach Don Granato said after the game. "It's great. It's fun to see the guys play that way, obviously. Lots of guys, I mean, they care and they work. We're young.

"You see the care behind the scenes. It's really nice to see them enjoy this tonight."

The Blues know how the Sabres have felt. Prior to the current winning streak, St. Louis lost a team-record eight consecutive games in regulation while getting outscored 38-12.

"When things aren't going well and you're losing, it's tough coming to the rink," O'Reilly said. "Everything's negative, you're watching video and it's negative, you're not doing what you what you want to do, so it's clearly a different feel in here and it's something we want to keep maintaining and keep building it and still we've got a lot of work left. Win the next game and go from there."

During their winning streak, the Blues have outscored their opponents 30-16.

"Just the way we're playing the game as a team is a lot stronger," St. Louis center Robert Thomas said. "And once you're winning, you're a little bit looser, more relaxed and that also helps you create more chances offensively."

"We thought it was best (Krug) stay off again today and then get a skate tomorrow and see how he feels," Blues coach Craig Berube said after Tuesday's practice.

Forward Tyson Jost made his Sabres debut Tuesday after arriving from Minnesota on a waiver claim, and winger Zemgus Girgensons returned after sitting out one game due to an undisclosed reason.

Defenseman Mattias Samuelsson was back in the lineup after missing a month with a lower-body injury, rejoining Rasmus Dahlin on the top pairing.

"He's a presence within the locker room, he's a presence on the ice," Granato said. "He's an incredible athlete -- size, speed, strength, agility. And he tiers everybody down in the sense that he comes in, he plays with Dahlin, that means nobody has to move up and fill that spot."

Buffalo goaltender Craig Anderson started in Montreal, making 29 saves for the win. Eric Comrie is sidelined by a lower-body injury, so Ukko-Pekka Luukkonen could get the call against the Blues.