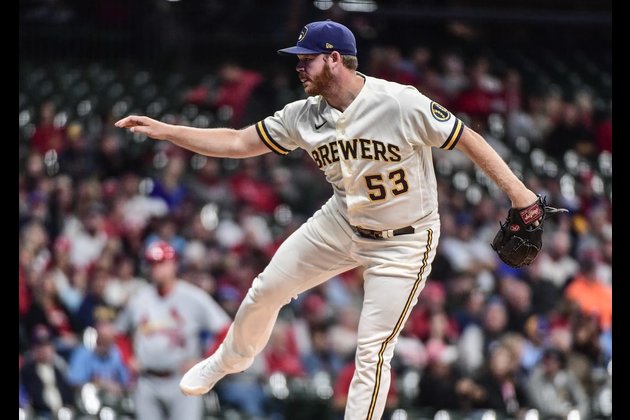 Brandon Woodruff tossed six scoreless innings and Devin Williams worked out of two late-inning jams as the Milwaukee Brewers moved within a half-game of the final National League wild-card spot with a 5-1 victory over the visiting St. Louis Cardinals on Wednesday.

Milwaukee (83-72) closed within a half-game of Philadelphia (83-71) for the third wild card as the Phillies lost 4-2 to the host Chicago Cubs. Philadelphia holds the head-to-head tiebreaker against the Brewers.

Woodruff (13-4) scattered five hits while striking out 10 and walking one. It was his fourth consecutive start with at least 10 strikeouts.

After being blanked by Woodruff, the Cards pulled within 2-1 when Andrew Knizner opened the seventh against Matt Bush with his fourth home run.

Bush then allowed a double and a walk, and both runners advanced on a ground out. Williams entered and intentionally walked Lars Nootbaar to load the bases. Williams then got Juan Yepez on an inning-ending, double-play bouncer to short.

In the eighth, the Cardinals had runners on first and third with one out, but Williams struck out Knizner and Ben DeLuzio. Brad Boxberger finished with a perfect ninth.

Milwaukee scored three runs in the bottom of the eighth to extend the lead to 5-1.

The Brewers loaded the bases with no outs with two walks and a double by Luis Urias off JoJo Romero. Giovanny Gallegos took over on the mound and walked pinch hitter Christian Yelich to force in a run. Victor Caratini followed with a two-run ground-rule double to left-center.

Milwaukee took a 1-0 lead in the third off Jose Quintana (6-7) when Tyrone Taylor doubled and came home on Hunter Renfroe's two-out single.

The Brewers made it 2-0 in the sixth on Keston Hiura's RBI double.

Quintana allowed just one run on four hits in five innings. He struck out seven and walked two for the Cardinals (90-66), who clinched the NL Central title with 6-2 victory in the series opener on Tuesday.