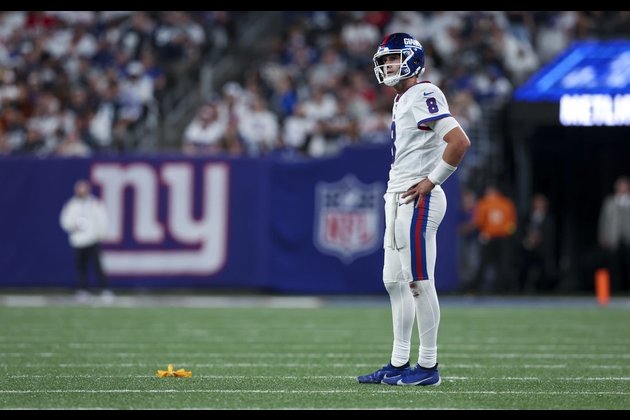 Jones accounted for 275 total yards while recording at least 75 yards on the ground for the third time in his career.That ultimately wasn't enough in a 23-16 defeat, but Jones showed the kind of leadership the team hopes to channel in Sunday's game against the visiting Chicago Bears -- and going forward. New York (2-1) has started the season strong despite a thin receiving corps that absorbed more bad news during the Dallas game, as No. 1 wideout Sterling Shepard suffered a torn ACL in his left knee on a non-contact play.

Contact has been a hot topic as the Giants attempt to keep Jones healthy and the offense running. He's averaging 8.3 rushing attempts through three games and was hit 12 times with 17 pressures in the loss to the Cowboys. Jones has been sacked 13 times this season.

"You want to eliminate, or at least limit, the number of hits," Daboll said. "You can tell a quarterback, don't take this. That's usually when they start thinking about things. He's making good decisions, when to take off. Guys that can scramble, making loose plays, put pressure on the defense. I'll never take that away from him."

New York hopes to get a boost from struggling Kenny Golladay as well as a pair of receivers in Kadarius Toney (hamstring) and Wan'Dale Robinson (knee) who are hoping to come untracked after navigating early-season injuries. In addition to those injuries, the Giants have mounting concerns in the secondary. Cor'Dale Flott (appendix) is a new addition to the injury list and Nick McCloud (hamstring) is unlikely to play in Week 4.

Fortunately for Daboll, running back Saquon Barkley remains a stabilizing force for the Giants' attack. He leads the NFL with 408 yards from scrimmage, an average of 136 per game, and has a history of faring well against the Bears. Barkley rushed for 102 yards in the most recent meeting, and had 146 scrimmage yards in a home overtime win against Chicago in December 2018.

The Bears (2-1) are coming off a 23-20 home win against Houston in which their defense aided a struggling offense.

A Roquan Smith interception deep in Houston territory set up Cairo Santos' game-ending field goal. Quarterback Justin Fields was 8-for-17 for 106 yards and a pair of interceptions. Fields was resolute about shifting his focus toward the Giants.

"Just learn from your mistakes knowing that you're not going to be perfect and move on. ... Just correct each and every mistake and try to be better in every aspect," he said.

Smith missed practice Wednesday, as did cornerback Jaylon Johnson, with a quad injury. He'll be needed for a repeat of last week's good fortune.

An opportunistic defense and sterling running game helped the Bears take down Houston despite losing top rusher David Montgomery (ankle) to injury in the early going, and Chicago ran for 281 yards. Khalil Herbert enjoyed a breakout game, running for 157 yards and two scores.

Chicago boasts a three-game winning streak in the series and a 31-21-2 all-time edge against New York. The Bears rolled past the visiting Giants 29-3 in the teams' most recent meeting in Week 17 of last season, although their leading passer (Andy Dalton) and rusher (Montgomery) from that afternoon are no longer with the organization and day-to-day, respectively. Montgomery didn't practice Wednesday.

Bears coach Matt Eberflus said the team hopes receiver Velus Jones Jr., who has missed the first three games with a hamstring injury, will be available against the Giants. He was limited in Wednesday's practice.

"He's been conditioning, working in there," Eberflus said.

NEW YORK, New York - Concern about the spreading of Covid-19 across China kept investors on edge Monday, with all ...