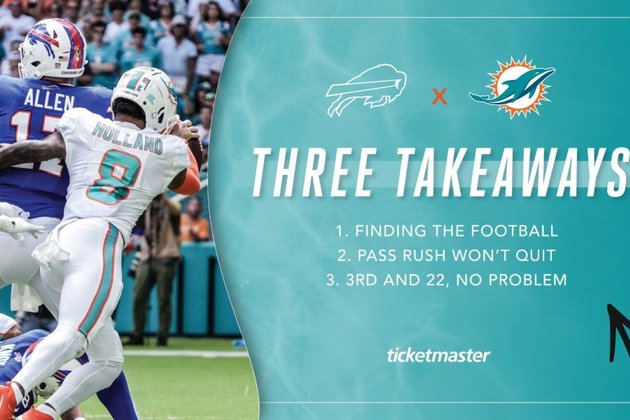 How are we feeling, Dolphins Nation? Your Miami Dolphins are 3-0 for the first time since 2018 after a thrilling win over division rival Buffalo, also a first since 2018. It was a total team effort and while it seems impossible to choose just three takeaways from the game, we'll put forth our best effort to do just that.

For more coverage of the exhilarating win, download the Drive Time Podcast with Travis Wingfield is the Miami Dolphins Podcast Network's home for in-depth analysis and coverage of your team.

Here are the three takeaways from Miami's 21-19 Week 3 victory vs. Buffalo

One could argue that at least half of the Bills' 11 third-down conversions were the results of a red-hot quarterback doing things that maybe no other athlete on the planet could achieve. Despite Josh Allen making play-after-play, the Dolphins defense made one more, starting with safety Jevon Holland.

Miami's sensational second-year safety set a career high with 10 tackles. He also had two passes defensed, 1.5 sacks and forced fumble that set up the offense at the +6-yard-line.

Hands on footballs was the name of the game for the Miami defense. Allen ended the game with 400 yards passing, but he averaged just 6.43 yards per pass, a full 2.6 yards lower than his season average entering play. A big part of that defensive efficiency was getting hands on the football. The Dolphins forced 21 incompletions - nine of those via passes defensed (Xavien Howard the other Dolphin with two).

Back to Holland, his first quarter forced fumble was the first of his career. He ran around two Bills defenders off the edge and dislodged the ball from Allen's hand. For the second time this season, Johnny on the spot was none other than the player leading off our second takeaway...

Melvin Ingram is one of several Dolphins offseason acquisitions paying massive dividends through three games. Ingram made several critical plays - forcing a fumble, recovering his second fumble of the season and recording two sacks. But it was his effort on the final play of the game that really stood out.

Ingram's rush rep - his 32nd of the game - sprung him towards the quarterback. But Allen escaped and got the ball to wide receiver Isaiah McKenzie. Ingram immediately turns and chases the play. When McKenzie hesitates in the Miami secondary, Ingram cuts him down before McKenzie can get out of bounds and the clock strikes triple zeros. It was an outstanding effort from a tremendous veteran defender.

That final drive was full of pass rush wins. Emmanuel Ogbah blew through the line and drew a critical holding call that saved the Miami defense 10 yards at a time where they could hardly afford to surrender another inch.

Jaelan Phillips made his presence felt on those final few plays. Andrew Van Ginkel, Christian Wilkins and Zach Sieler all played major roles down the stretch. Jerome Baker added a half sack of his own. It was a total team effort that produced 46 pressures on Allen's 73 drop backs.

"It's what you get into sports for," McDaniel said following Tagovailoa's six touchdown performance last week in Baltimore. "It is as cool for the coaching staff and him that it was coming to life. I think it was a moment that he will never forget."

This week, McDaniel went back to the well.

"I think that's one that's a big play that Tua will always remember, that a lot of his teammates will because he was battling through and that's really hard," McDaniel said.

On the third-and-22 play, Waddle fakes to the corner before bending his route it right back to the post at the same moment the Buffalo safety flipped his hips. Tagovailoa stepped up and threw a dime between the two Bills defenders for a 45-yard gain.

On the play, Tyreek Hill helped displace the safety on the opposite side of the field with a full throttle clear-out route - the type of route that measures one's love for his teammates.

"It looked like they ran a quarters coverage, and they played really deep, so I tried to hold the boundary - or the field safety to Tyreek's (Hill) side," Tagovailoa said. "I tried to hold him and then I came back to (Jaylen) Waddle, trusting that Waddle would beat his guy, which he did."

On the receiving end, Waddle is the first Dolphins receiver with back-to-back 100-yard games since 2019. He's just two yards off the league-lead with 340 yards and top three in touchdowns and first downs.

For more analysis, takeaways and breakdowns, check out the Drive Time Podcast with Travis Wingfield, available on Apple, Spotify or wherever you get your podcasts.