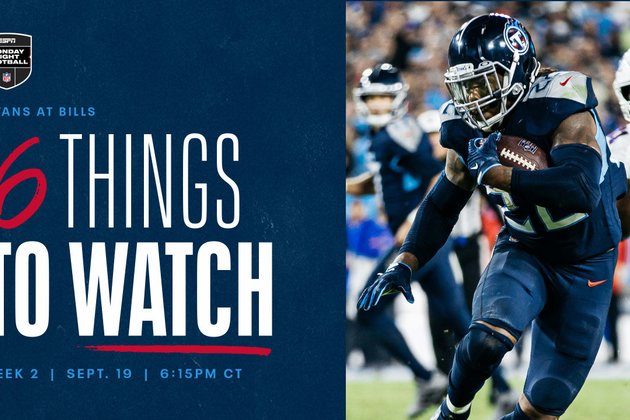 Here's a look at six things to watch in the contest:

The Titans need to get running back Derrick Henry rolling. Really rolling. This is critical for several reasons. For starters, a big night for Henry would allow the Titans to control the ball and the clock while also slowing down Buffalo's pass rush. Also, the more success the Titans have running the ball, the better down-and-distance situations they'd be in. This would limit Buffalo's opportunities to get after the QB. A good night for Henry and the running game would also potentially limit Buffalo's possessions on offense. Henry has performed well against the Bills in recent years, including a 143-yard, three-TD performance a year ago. The Titans would gladly take those totals on Monday night.

The Bills racked up seven sacks in their opener, led by Von Miller's two sacks. They did it without rushing extra guys on most occasions, and the pressure also contributed to Rams quarterback Matthew Stafford throwing three picks. Well, the Titans will have to be on their game up front in this one. There were encouraging signs in the opener, as Titans quarterback Ryan Tannehill was sacked just once, and that was on a bootleg when he was stopped at the line of scrimmage. The challenge for the Titans offensive line - including rookie right tackle Nicholas Petit-Frere - will be much different against the Bills.

The success of Tennessee's run game could go a long way in setting up a passing attack that produced seven plays of 20 yards or more in Week One. And while that total led the NFL, the Titans were still left wanting - and needing - more. The Titans have vowed to get receiver Robert Woods and tight end Austin Hooper more involved following a week when rookies Kyle Philips and Treylon Burks made some big plays. Last week it was running back Dontrell Hilliard who produced a pair of scores, but with Hilliard out for Monday's game, the Titans will need other players to step up against the Bills.

Bills quarterback Josh Allen may be the NFL's best quarterback. He's big and strong, and he can sling it. Allen is a threat as a runner and passer, and his improvement since first entering the league has been impressive. And, in Buffalo, he has a supporting cast that's hard to slow down, from receivers Stefon Diggs, Gabe Davis and Isaiah McKenzie to tight end Dawson Knox to a handful of running backs who are used differently. The Titans face a big challenge here, and every position is on the spot - from the pass rushers to a secondary that will be without starting cornerback Kristian Fulton. This game will provide a big opportunity for cornerback Caleb Farley. The Titans need to stiffen up inside the 20 and hold the Bills to field goals.

One of the biggest disappointments - and surprises - in Sunday's season opener was the leaky run defense by the Titans. Giants running back Saquon Barkley had way too much success last Sunday, ripping off 164 yards on a day when the Giants ran for 238 yards as a team. The challenge against the Bills is much different, as they use several backs - Devin Singletary, Zack Moss and James Cook - in different ways. But for the Titans, the mindset should be the same - be disciplined, wrap up, and tackle. This is a big point of emphasis across the board following a week when the Titans posted double-digit missed tackles.

Safety Kevin Byard painted a pretty good picture of what the Titans should expect on Monday night - a college-type atmosphere with a rowdy crowd and a ramped-up Bills team looking to avenge back-to-back loss to the Titans in Tennessee. The Titans avoided turning the ball over on offense in the opener - their lone turnover came on special teams - and they can't afford to give the Bills freebies in this one. Also, the team's first-year players will be playing their first road game in the NFL, where their poise will be tested. Needless to say, this one is going to be far from easy for the Titans. The last thing they need to do is make it easier for a good Bills team.