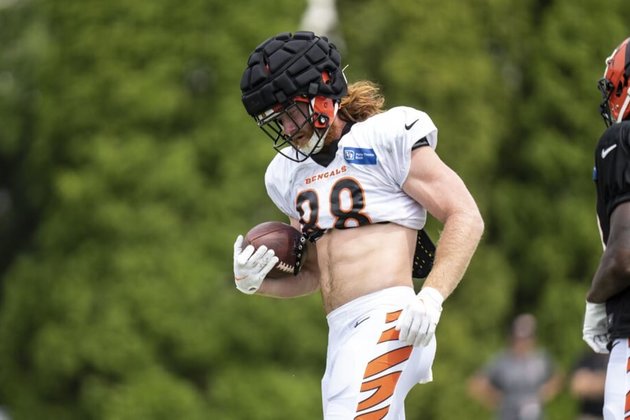 I wanted to know since you have been at camp, who has been one of the more underrated UDFAs that have caught your eye, and have a real shot at making the 53 or Practice Squad role. Malik Thiam, Seattle, WA

MALIK: Not much room on a talented, young roster where not one returning Super Bowl starter is older than 28.

That said, a pair of wide receivers has led the CFA field in Kwamie Lassiter II of Kansas and Kendric Pryor of Wisconsin with a batch of catches. And with Evan McPherson bombing away no matter who is in the operation, Pittsburgh long snapper Cal Adomitis must be doing a good job.

Defensively, Vanderbilt cornerback Allan George opened some eyes when he took some snaps with the ones during a day last week ahead of second-rounder Cam Taylor-Britt. Defensive coordinator Lou Anarumo said they're both still competing and Taylor-Britt was with the ones at times when they went nickel on Friday. But as Local 12 columnist Richard Skinner has opined, that's still a noteworthy move and tells you what they think of George.

There are also two CFA offensive linemen who have flashed at times in practice and look to be sticking around in some capacity. Georgia Tech tackle Devin Cochran and Mississippi guard-center Ben Brown are guys to watch. I'm excited for Friday night because that's when the real film starts.

While we may most likely be talking about practice squad rather than the roster, special teams is usually the pathway to the 53-man roster.

Can Lassiter win the punt returner position? Could George (or Delonte Hood) prove to be indispensable on kick/punt coverage? All of it will be decided in the preseason games. Plus, there are other issues. If, say, they'd like to develop Adomitis while keeping McPherson comfortable with Clark Harris, is Adomitis vulnerable to being claimed on waivers as the top long snapper coming out of the draft?

Hello, Mr Hobson! I hope all is well with you. My question is about preseason and who you're excited to see. My eyes will be on the depth at defensive end. I think they've assembled some serious talent in the past two years there. Joe Goodberry, Niagara Falls, NY

JOE: Good to hear from you again and hope you are enjoying Upstate New York this summer, one of America's best-kept secrets.

I'm probably like everybody else and anxious to see if Jackson Carman nails down left guard, if Zach Carter can give them quality snaps at the backup three technique, if back-up edge Joseph Ossai is anywhere close to the form of his lights-out debut in his lone NFL game and if punter Kevin Huber makes it to his 14th NFL season and breaks Ken Riley's club record playing in his 208th game in the opener.

And because, like the late great Pete Brown, I love big running backs, I still think Jacques Patrick can lead the NFL preseason in rushing and am looking forward to him getting a bunch of carries. Same with Trayveon Williams, who has looked good in camp, as they vie for a practice squad spot. I guess they could both get one.

Couldn't agree more with you on the edge. Jeffrey Gunter, the seventh-rounder from Coastal Carolina, has had quite the active camp.

But because of injuries, there are questions around the kids, too, with Ossai, Khalid Kareem and Wyatt Hubert all coming off injuries on the edge. Kareem, who always seems to produce when he's in there (ask Drew Lock), has yet to get on the field while recovering from offseason shoulder surgery. With Khalid, let's hope that "the third time's the charm", as he looks to have his healthiest training camp in his three seasons in Cincinnati. Ossai and Hubert missed virtually all of their rookie seasons and need to make hay in the preseason games.

Speaking of the edge, another guy I'm anxious to see is an edge who also plays tackle, the undrafted rookie Tariqious Tisdale out of Mississippi. He has great measurables, but is looking to break out.

Hey Geoff... when it comes to Jessie Bates at what point do the bengals think or listen to trade offers on him? If a team were to make an offer similar to Palmer's hold out would they trade him or will he only play for Bengals in '22? Thanks Brendan Reynolds, Oreland, PA

BRENDAN: I really think they're banking on Bates playing for them this season. They're trying to win the thing this year and they've already set aside his $13 million for this year.

There's just no way you're going to get the Carson Palmer deal or even close (a first-rounder in '23 and a second-rounder in '24) at this point. Not for a safety. Only a quarterback. The only way that Palmer trade even happened was the NFL version of a solar eclipse.

A starting quarterback not only got hurt 48 hours before the 2011 trade deadline, but the team he was playing for was coached by a guy (Hue Jackson) that had a great relationship with Bengals president Mike Brown. Just don't see anything like that at the moment. They're banking on Bates in '22.

With the club already exercising its fifth-year option on left tackle Jonah Wiliams, I think there are a few guys ahead of him in the queue this camp. I'm thinking of two playoff heroes, safety Vonn Bell and linebacker Germaine Pratt, as well as tight end Drew Sample.

There's no better monologue in movie history than Kevin Costner in Bull Durham talking about his 21 days in The Show: "You don't carry your luggage in The Show." But any movie that has James Earl Jones glimpsing Moonlight Graham's career stats on the Fenway Park scoreboard as Oil Can Boyd is pitching, well, Field of Dreams in a walkoff.

What is your opinion of Hayden Hurst? I know that a lot were upset when Uzomah left, but personally I am looking forward to see Hurst play. He really seems that he has the"Bengal Attitude " already! Yes, the attitude is a great feeling! Steve Kreiner, Reading, OH

STEVE: I agree. He's got a great second-chance-prove-you-wrong-chip-on-the-shoulder that the Bengals have used so successfully in the past with guys like Reggie Nelson and Adam Jones and now with guys like Mike Hilton and Trey Hendrickson.

Nearly every coach and player I talk to loves C.J. Uzomah and what he did for them last year. But they also say Hurst is such a natural receiver at tight end that he's simply a better fit for this offense. And it's not just on paper. Hurst has looked great and seems to be fitting very nicely into Zac's offense. Arrow definitely seems to be pointing up.