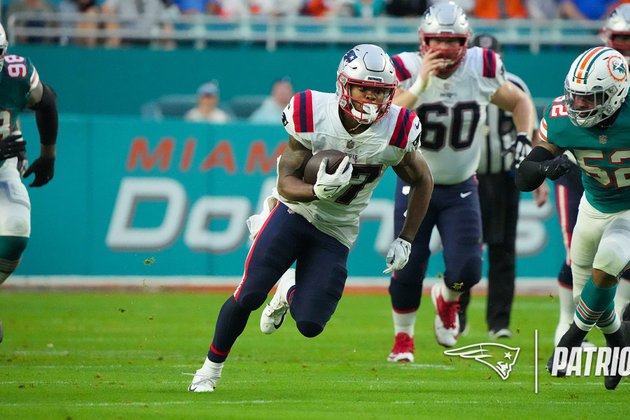 Damien Harris capped off his third season by scoring his 15th touchdown, providing a nice exclamation point to a breakout season that saw him fall just short of 1,000 yards. Harris was arguably the team's offensive MVP this season, as his scoring prowess was counted on throughout the season.

As the Patriots wrapped up Thursday's practice, Harris was looking forward to making his playoff debut, "I just want to treat this like another game, in the sense I've got to go out there and do my job."

Off the field Harris has continued to emerge as a leader, earning praise from running backs coach Ivan Fears earlier this week for his toughness and how he leaves it all out on the field every carry.

"He's leading by example," said Fears. "He plays the game the way we need him to play the game, that's what counts to me. He's focused in on what he needs to get done on the field and he's playing with everything he's got and we're going to need that this week. Gotta love the kid for his toughness...his physical toughness, his mental toughness and for the kind of kid he is out there. He's turning into a leader for us and that's kind of exciting."

"I just play the game the best way I know how," said Harris, who, along with Rhamondre Stevenson and Brandon Bolden will be key players for the Patriots this weekend as the open the playoffs in the Wild Card round against their divisional rivals, the Buffalo Bills.

"They do a great job of trying to swarm the ball, they get all those DBs and linebackers with all that speed, they got they do a good job trying to gang tackle," said Fears of the Bills defenders. "That's the challenge. They're a very active defense, very fast, very athletic."

Though Harris is a veteran of 27 NFL games, this will be his first time entering the playoff fray. How well he and Stevenson handle their initiation will play a big part in how the game goes. Fears laid out how much more intense the playoffs can be.

"Everything on the field goes up a notch," said Fears. "The intensity of the game is up a notch. Nobody on the football field is going to be taking a break, you've gotta know that. Not one son of a gun's going to be looking to take a break. You're going to have to give everything you've got every play. Guys that have never been in that atmosphere sometimes they're kind of caught by surprise how intense the game is. How intense every player is. It's going to be a fight to the end and that's what it's all about. Playoff time, there's a reason why everyone likes watching playoffs, because everyone's giving every ounce they've got out there on the field and that's the playoffs."

The Patriots returned inside Gillette Stadium as they practiced for the final time before heading to Buffalo on Friday. Jamie Collins was back at practice after missing Wednesday's session with an ankle issue, but Kyle Dugger and Isaiah Wynn were not spotted during the brief stretching period. Wynn was listed as the only non-participant, while Dugger was again listed as limited despite not being seen during the brief stretching window. The Patriots listed 13 questionable players on the final injury report.

If Wynn is unavailable, the Patriots will have some options to weigh, whether it's moving Trent Brown to left tackle and inserting Michael Onwenu at right tackle, or using Justin Herron at left tackle and keeping Brown on the right with Onwenu maintaining his role as a jumbo package tight end. The Patriots had a lot of success with that package in the first game against Buffalo and might like to keep that option in the bag.

Adrian Phillips on getting more takeaways:

"More times than not the team that controls the ball generally wins the game. We always focus and practice on stripping the ball, getting turnovers any way that they can come, because we know they come in bunches. We haven't been getting turnovers in our losses and we noticed that. It's really up to guys to just finish plays. When we get those opportunities you have to finish."