What can Patriots learn from previous Bills battles 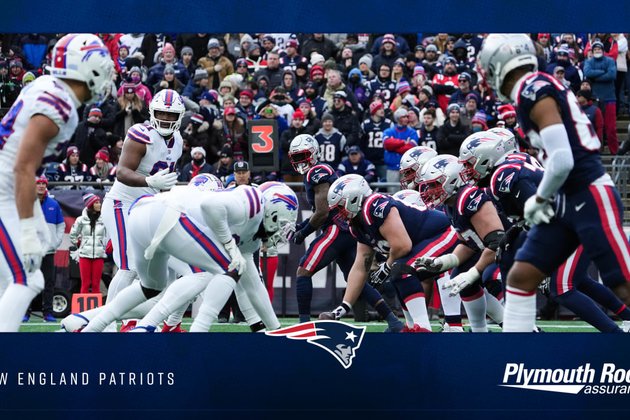 The Patriots and Bills will meet for a third time this season in the Wild Card round as the divisional rivalry moves to the postseason for the first time in NFL history.

The first game, a 14-10 win by the Patriots, was uniquely influenced by the conditions with New England rushing the ball 46 times for 222 yards and throwing just three passes for two completions totaling 19 yards. Even still, Buffalo found their stride and New England needed a fourth-down stop from their own 18-yard-line to close out the four-point win.

The rematch in New England followed a closer script to those of the Patriots' losses this season, with Buffalo establishing a 10-point lead at halftime that they would not relinquish, rolling to a 33-21 win. Josh Allen played a near-perfect game, with the Bills scoring on six-of-seven meaningful drives as the Patriots had no answers for the quarterback. Allen finished the game with nearly 400 yards of total offense, throwing three touchdowns with no turnovers.

With one game adversely affected by weather and another looking like a Bills-run football clinic, the third matchup is likely to follow its own unique script. Both teams know each other well, there will be no major surprises.

"Good team, obviously," said Bill Belichick on Monday morning. "They're the third seed in the conference. We know they're a good team. They certainly played well in the last game we had against them...We have a lot to get ready for."

For the Bills, recreating their performance from the second outing would be ideal, while the Patriots will need to solve both the bigger problems that have haunted them throughout the season and those specific to Allen and the Bills, who have now won three of the last four against New England.

Here are the key areas to focus on from the first two matchups and what New England must get right if they're to pull off an upset of the AFC East division winners.

With the Patriots going 1-3 over their last four games, there aren't a ton of strengths to hang their hats on, but the potent running of Damien Harris and Rhamondre Stevenson remains the team's most consistent feature. When the Pats are able to lean into the run game because they have a lead, they are at their most dominant. When they're forced to take to the air to play catch up, as has often been the case in the seven losses this season, the most effective mode of attack is blunted.

New England had success running the ball in Buffalo, but it was more about a big touchdown run by Harris and some timely end-of-game runs by Stevenson than just total ground domination from start to finish. That's why the first matchup still went down to the very end.

Buffalo's run defense isn't terrible but it remains the biggest target on their defense, as the Bills' preference is to play light and fast in nickel personnel. Buffalo's defense ranks first-overall in the league in DVOA but their rush defense ranks just 11th, while they're 13th in rushing yards allowed. Those don't signal a gaping weakness, but perhaps enough of an opening for the Patriots to unleash their attack with a physical gameplan featuring plenty of heavy sets behind six offensive linemen and fullback Jakob Johnson.

Simply put, any playoff run will likely be powered by the ability of the rushing attack to take and keep control of the games. Buffalo should be very aware of this and will need to match the defensive energy they brought two weeks ago.

Can defense discover their playoff clutch?

In all seven of the Patriots losses this season, the offense closed the deficit to one score or took the lead in the fourth quarter and the defense could not get the last stop necessary to get the win.

On one hand, it says something about how the Patriots have continued to compete despite their litany of slow starts, but on the other, it shows a defense that struggles to step up and make plays with the game on the line.

In round one against the Bills, it was one of the rare occurrences this season where the defense was able to close out a win. The victory over the Chargers was another example, with Adrian Phillips' pick-six proving to be the difference, as was the surprisingly difficult win over Houston where the defense forced a three-and-out with the game tied to open the door for an impressive offensive drive that produced the game-winning field goal.

Despite the issues that have haunted the Patriots throughout the season, just a handful of defensive plays would've dramatically altered their record. Finding some clutch on the defensive side is essential to any chances of upsetting the Bills.

The Bills are a well-known pass-first team and that was why the first contest provided such an advantage for the Patriots. But in the rematch, Buffalo was able to do what they do best through the air, despite missing both Cole Beasley and Gabriel Davis.

But their absences didn't really matter as it was Isaiah McKenzie who had a huge day with 11 catches for 125 yards while seeing a lot of Myles Bryant in coverage.

With Beasley and Davis back in the mix and Bryant missing last week after being placed on Reserve/COVID-19, the early prognostication is that the Bills will have an even bigger matchup advantage in the passing game.

Add in uncertainty surrounding New England's best interior pass rusher Christian Barmore, as well as ascending safety Kyle Dugger, and the Bills should be confident they'll have spots to exploit in the Patriots defense.

Bryant and Dugger's potential returns would be a nice boost, but with or without them the Patriots will need a better plan to challenge the Bills' potent aerial assault and might very well have to lean on practice squadders like D'Angelo Ross and Daniel Ekuale to get the job done.

After 17 games, we know who the 2021 Patriots are, for better or worse. Their inability to fix their recurring problems is a maddening feature of this year's team. Every week they know the slow starts, turnovers and penalties have to be eliminated and yet each time they've lined up in a big game against a good opponent they haven't been able to avoid falling into the same problem patterns.

Offensively, this was a foundational year as most of the pieces on that side of the ball will be back. But defensively, this looks more like a last hurrah for some of the longest-tenured leaders on the roster and that's why it's not too late for some of the old vets to step up for a playoff run just one last time.

The biggest goal should be to simply play a bad-football-free game and see where the chips fall. If they can just avoid undercutting themselves there's a good chance this game will go down to the final possession. And then if the defense gets a timely stop, who knows what could happen.

There isn't much left to lose. The end of the 2021 season has been as disappointing as a season can be for a team that still makes the playoffs. They already lost the division and got beaten convincingly by Buffalo at home for the second year in a row.

But that's the thing about the playoffs and why the Patriots still have a chance to end this season with a bang. While ending Buffalo's season certainly won't be the last word in a continuing divisional rivalry, it would be a refreshing victory for a Patriots team that most are already leaving for dead and buried and give them some confidence going forward against the now two-time defending division champs.