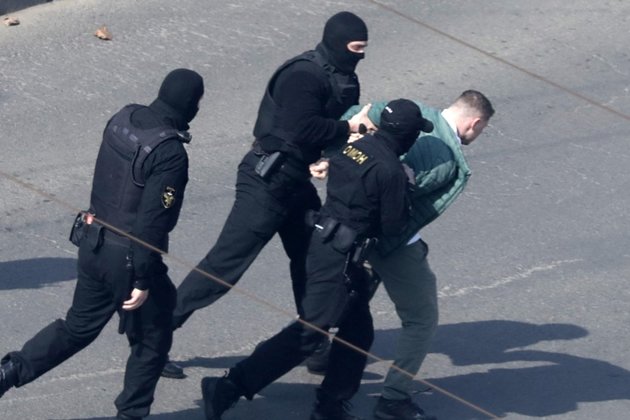 MINSK -- Belarusian law enforcement officers have searched the homes of several journalists and rights activists across the country as a crackdown on civil society and dissent continues more than a year after a disputed August 2020 presidential election that authoritarian ruler Alyaksandr Lukashenka claims to have won.

Dozens of news websites have been blocked in Belarus in recent months and independent media outlets shut down as part of a sweeping crackdown on information in the wake of unprecedented protests triggered by last year's presidential election, which the opposition and West say was rigged.

The Minsk-based Vyasna human rights center said in a statement that a new wave of searches occurred early in the morning on December 1 in the cities of Hrodna, Brest, Vitsebsk, Krychau, Rechytsa, and Mazyr, as well as other places in the country.

In the southeastern city of Mazyr, police confiscated books and posters from activist Uladzimer Tselepun after searching his apartment and cottage.

The homes of two activists in the eastern city of Vitsebsk, Uladzimer Kiyko and Mikalay Kachurets, were also searched. In another eastern city, Krychau, police detained journalist Syarhey Nyarouny after searching his apartment.

Officers from the Department for Financial Crimes Investigations in the eastern city of Mahilyou, meanwhile, detained journalist Valeria Lepeshava for questioning. No reason was given for the move, according to Vyasna.

Read our ongoing coverage as Belarusian strongman Alyaksandr Lukashenka ramps up pressure on NGOs and independent media as part of a brutal crackdown against protesters and the opposition following an August 2020 election widely considered fraudulent.

In the southeastern city of Homel, police briefly detained for questioning journalist Larysa Shchyrakova after confiscating her telephone, memory disks, computer hard drives, and equipment used for reporting. Shchyrakova was released after she refused to answer questions.

Also, in Homel, police searched the home of Vasil Palyakou, an activist of the opposition United Civic Party.

In the western city of Brest, police searched the home of journalist Alena Hnauk.

Tens of thousands of people have been detained, and human rights activists say more than 800 people are now in jail as political prisoners, while most opposition leaders have left the country fearing for their safety.

Many Western governments have refused to recognize Lukashenka as the legitimate leader of Belarus.