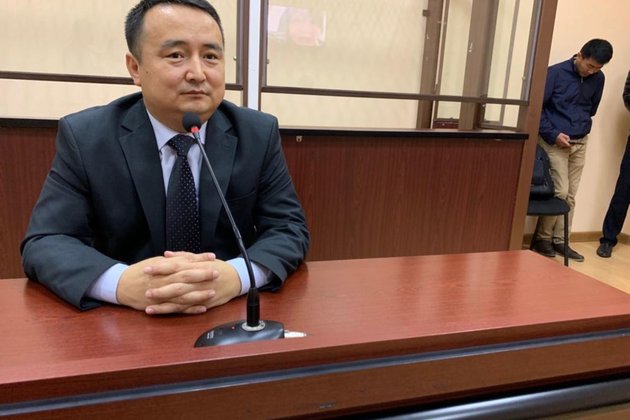 NUR-SULTAN -- Dozens of people have rallied in Kazakhstan's largest city, Almaty, demanding immediate release from house arrest of the leader of a group that raised concerns over the internment of ethnic Kazakhs in China's northwestern Xinjiang region.

The protesters on July 12 called on President Qasym-Zhomart Toqaev to intervene to have the charge of inciting ethnic discord against Serikzhan Bilash dropped.

The demonstrators were holding posters, saying 'Serikzhan is a national hero,' and 'Intimidating Serikzhan means intimidating all Kazakhs.'

Bilash, the leader of the Atazhurt Eriktileri (Volunteers of the Fatherland) group has been under house arrest in Nur-Sultan, the capital, since March after his organization staged several gatherings of ethnic Kazakhs from Xinjiang who have settled in Kazakhstan and complain that their relatives are being held in what the Chinese government calls 'reeducation camps.'

Bilash was born in Xinjiang, which borders Kazakhstan, and is a naturalized Kazakh citizen.

In February, an Almaty court found Bilash guilty of being the leader of an unregistered organization and fined him the equivalent of $670.

Atazhurt Eriktileri has been operating in Kazakhstan since 2017 without registration.

Bilash said in February that his group would continue to defend the rights of ethnic Kazakhs in Xinjiang, and vowed to try again to register the group at the Justice Ministry.

The United Nations said in August 2018 that an estimated 1 million ethnic Uyghurs and other mostly Muslim indigenous people of Xinjiang were being held in what it described as 'counterextremism centers' in northwestern China.

The UN also said millions more had been forced into internment camps.

China says that the facilities are 'vocational education centers' aimed at helping people steer clear of terrorism and allowing them to be reintegrated into society.