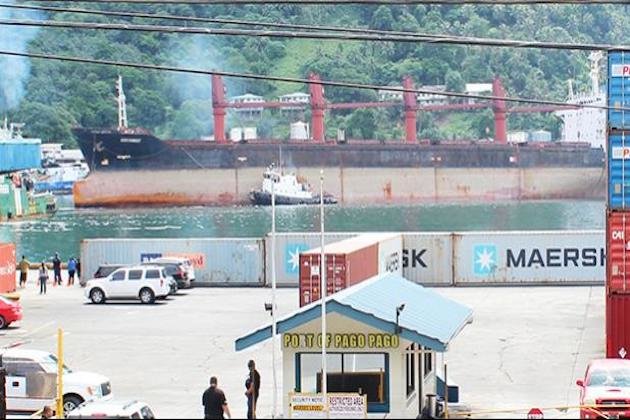 <p>PYONGYANG, North Korea - The United States has been slammed by North Korea for seizing one of its cargo ships in Indonesia and forcing it to travel to American Samoa, a U.S. territory.</p><p>A spokesperson for the Foreign Ministry of the Democratic People&#39;s Republic of Korea (North Korea) demanded on Tuesday the ship, the &#39;Wise Honest&#39; be released. The spokesman, in a <a href="https://kcna.kp">statement</a> carried by the official state news agency KCNA: &quot;The United States committed an unlawful and outrageous act of dispossessing our cargo ship by forcibly taking it to Samoa (U.S.), linking the ship to the &quot;sanctions resolutions&quot; of the United Nations Security Council (UNSC) and its domestic &quot;sanctions acts,&quot; all being imposed against North Korea.&quot;</p><p>The cargo ship was seized last month by authorities in Indonesia acting on a request by the U.S. Department of Justice. The ship was then transported to the American Samoan port of Pago Pago, a voyage that took around 3 weeks.</p><p>The destination of <a href="https://en.wikipedia.org/wiki/American_Samoa">American Samoa</a> was chosen because of &quot;its central strategic location,&quot; U.S. Coast Guard public affairs officer Amanda Wyrick told AP.</p><p>&quot;We also have a good strong relationship and partnership with the American Samoan government. With that being said, we also already have the resources that are able to ensure the security of the vessel but most importantly the Port of Pago Pago,&quot; she said.</p><p>&quot;I do know that, we have a marine and safety security team here from Honolulu. We&rsquo;re conducting random patrols, also conducting inspection of the vessel and the Port of Pago Pago, keep an eye on things such as security breaches or vandalization of the ship itself.&quot;</p><p>What happens to the ship from here, according to the Coast Guard officer is up to the Department of Justice. North Korea is far from happy with that, maintaimng the U.S. is acting unlawfully.</p><p>&quot;The UNSC &quot;sanctions resolutions&quot; on North Korea, which the U.S. has employed as one of the grounds for its dispossession of our cargo ship, have flagrantly infringed upon the sovereignty of our state, and therefore, we have categorically rejected and condemned the whole of them all along,&quot; the statement from North Korea said.</p><p>&quot;Moreover, the United States&#39; impudent act of forcing other countries into observance of its domestic law is indeed a wanton violation of the universally accepted international laws which make clear that in no case can a sovereign state be an object of jurisdiction of other countries.&quot;<br /><br />&quot;The latest U.S. act constitutes an extension of the American method of calculation for bringing North Korea to its knees by means of &quot;maximum pressure&quot; and an outright denial of the underlying spirit of the June 12 North Korean-U.S. Joint Statement that has committed to establish new bilateral relations,&quot; the foreign ministry spokesman said.<br /><br />&quot;The U.S. should ponder over the consequences its heinous act might have on the future developments and immediately return our ship.&quot;<br /><br />&quot;The time when the U.S. held sway over the world at its own free will is gone long ago, and it would be a biggest miscalculation if the U.S. thought that North Korea is among the countries where the American-style logic of &quot;strength&quot; might work for,&quot; said the statement.<br /><br />The foreign ministry spokesman concluded by saying: &quot;We will carefully watch every move of the United States hereafter.&quot;</p><p>(Photo credit: Samoa News).</p>