Demonstrations continue across the U.S. over Trump administration's mass roundup of immigrants 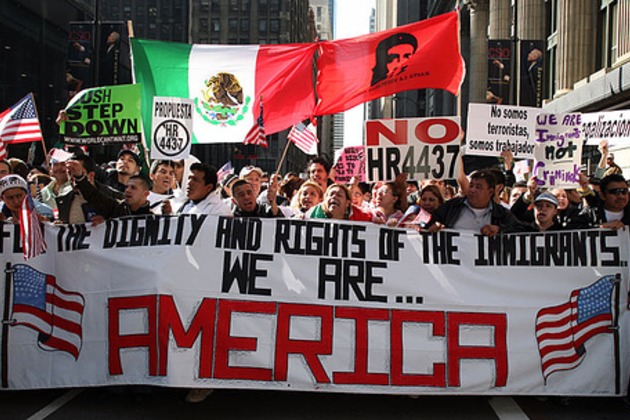 NORTH CAROLINA, U.S. - Demonstrations continued across the United States over the weekend against the Trump administration's mass roundup of immigrants.

In Raleigh, North Carolina, over 20,000 protested against Trump's harsh policies against both Hispanic and Muslim immigrants.

Minneapolis, New York City, Chicago, Virginia, Los Angeles, Baltimore also witnessed protests in response to the crackdown and arrests by the federal U.S. Immigration and Customs Enforcement on Thursday, which came close on the heels of the deportation of Guadalupe García de Rayos from Phoenix on Wednesday night.

Hundreds of protesters sought to physically stop the deportation of Rayos, a mother of two, who has lived in the U.S. for more than 20 years. Pictures of her in an armored car, waiting to be taken to Mexico, spread quickly on social media.

"People are terrified; they're afraid," said Maria Gabriela Aldana Enriquez, the education director for the Creative Alliance in Patterson Park, Balitmore, and a rally organizer.

Las week, hundreds of undocumented immigrants in New York, California, Illinois, Texas and other states were rounded up by federal agents in the first large-scale action under Trump, triggering panic in immigrant communities nationwide.

The customs agency has called its action "routine."

"The focus of these operations is no different than the routine, targeted arrests carried out by ICE's Fugitive Operations Teams on a daily basis," said agency spokeswoman Jennifer Elzea.

"The crackdown on illegal criminals is merely the keeping of my campaign promise. Gang members, drug dealers & others are being removed!" Trump tweeted.

Trump's policy adviser Stephen Miller on NBC said the emphasis was deporting those he called "criminal aliens" and who "pose a threat to public safety."

"We're going to focus on public safety and saving American lives and we will not apologize," Miller said.

Chinese stocks gain for third day in row, most other Asian markets dip

SYDNEY, NSW, Australia - Asian investors on Thursday ignored the ructions overnight on Wall Street and around the globe, keeping ...

WASHINGTON, DC - There will be no new coronavirus economic relief package in the U.S. before next Tuesday's presidential and ...

OTTAWA, Canada - Five major aerospace companies in Canada and Boeing have inked an agreement which will see a multi-decade, ...

WASHINGTON, DC - The U.S. Federal Communications Commission (FCC) is proposing a rule change that would require television and radio ...

WASHINGTON, DC - There will be no new coronavirus economic relief package in the U.S. before next Tuesday's presidential and ...

NEW DELHI - India and the U.S. held a "productive" and "successful" third round of 22 dialogue in New Delhi, ...

WASHINGTON, DC - The U.S. Federal Communications Commission (FCC) is proposing a rule change that would require television and radio ...

The U.S. space agency, NASA, reported Monday it has confirmed water can be found in sunlit areas of the moon, ...